Some 60 jeweled objects from the private collection formed by Sheikh Hamad bin Abdullah Al-Thani will be presented at The Metropolitan Museum of Art in the exhibition Treasures from India: Jewels from the Al-Thani Collection, opening October 28. The presentation will provide a glimpse into the evolving styles of the jeweled arts in India from the Mughal period until the early 20th century, with emphasis on later exchanges with the West. The exhibition will be shown within the Metropolitan Museum’s Islamic art galleries, adjacent to the Museum’s own collection of Mughal-period art.

“It is with great delight that we present to the public this selection of works representing several centuries of tradition and craftsmanship in the jeweled arts—from India’s Mughal workshops to the ateliers of Paris,” Thomas P. Campbell , Director and CEO of the Metropolitan Museum, said when announcing the exhibition.

Sheikh Hamad stated: “The jeweled arts of India have fascinated me from an early age and I have been fortunate to be able to assemble a meaningful collection that spans from the Mughal period to the present day. I am delighted that The Metropolitan Museum of Art will be exhibiting highlights from the collection, making the subject known to a wider audience.”

The exhibition is made possible by Cartier.

The display will include historical works from the Mughal period in the 17th century and from various courts and centers of the 18th and 19th centuries, including Hyderabad; a group of late 19th- and 20th-century jewels made for India’s Maharajas by Cartier and other Western firms; and contemporary commissions inspired by traditional Indian forms. On view will be several antique gems that were incorporated into modern settings by Maison Cartier, jewelry designer Paul Iribe, and others. Contextual information will be provided through historical photographs and portraits of Indian royalty wearing works similar to those on view.

India has been a vibrant center for the jeweled arts for many centuries, with its own mines yielding gold, diamonds, and many other precious and semiprecious stones. India’s Mughal rulers and their successors appreciated ceremonial and functional objects made of luxury materials. Among the Mughal works will be an elegant jade dagger originally owned by two emperors—the hilt was made for Jahangir and it was re-bladed for his son Shah Jahan, builder of the Taj Mahal. In the 19th century, the dagger was in the collection Samuel F. B. Morse, inventor of the Morse code. The hilt features a miniature sculpture—a European-style head.

Historically, the gem form favored throughout India has been the cabochon. In the traditional kundan technique, a gem is set within a bed of gold, and often backed in foil to enhance its color. Another highlight of the exhibition will be a gem-set tiger head finial originally from the throne of Tipu Sultan (1750–1799), which incorporated numerous cabochon diamonds, rubies, and emeralds in a kundan setting.

Also on view will be several examples of North Indian sarpesh and jigha (turban ornaments) from 1875–1900, brought together in a display that traces their evolution from traditional plume-inspired forms and techniques toward more Western shapes and construction. Silver foil backing was used; however, the diamonds were set using a Western-style claw or coronet, rather than the kundan setting.

And a work designed by the artist Paul Iribe and made by goldsmith Robert Linzeler in 1910 in Paris recalls the kind of aigrette (decorative pin) that would have ornamented the turban of a Maharaja or Nizam. At the center is a large emerald, carved in India between 1850 and 1900.

Related education programs will include two Friday Focus lectures, “Attributes of Splendor: The Role of Jewels in Projecting Power in Royal India” with Amin Jaffer (October 31) and “Jewelry and Power: Gold and Gems in Mughal India” with Michael Spink (January 9); a Studio Workshop on jewelry construction, involving wire looping and crimping, and stringing beads with silks and threads (November 1); a Picture This! program for visitors who are blind or partially sighted (December 11); and an Art Explore teen program (January 11). There will also be two exhibition tours (December 5 and January 12).

The exhibition will be accompanied by a catalogue published by the Metropolitan Museum and distributed by Yale University Press ($40, hardcover). Written by Navina Haidar, with a foreword by Sheila Canby, the Patti Cadby Birch Curator in Charge of the Department of Islamic Art, and contributions from Courtney Stewart, Senior Research Assistant, it draws on a study of the collection called Beyond Extravagance, edited by Amin Jaffer, that was printed by Assouline Publishing in 2013. 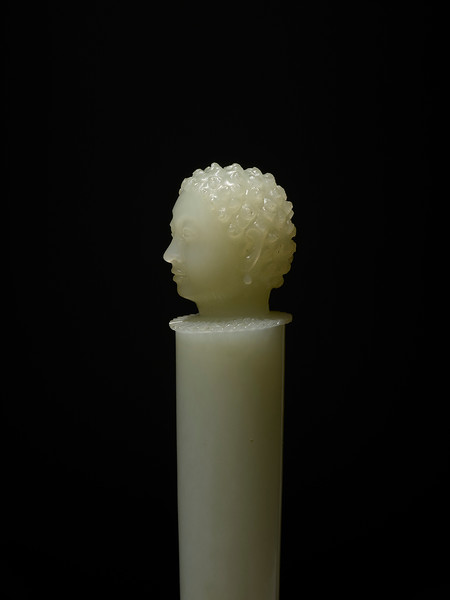