Italy latest strike in the world of imagination!

CRP Group’s ENERGICA is a sleek, powerful, state-of-the-art electric motorcycle made with Formula One technology. This workshop will look at the details behind this beautiful motorcycle’s unique design and the secret behind its high-performance 3D printing process.

CRP Group is a decades-old veteran of the racing mechanics scene, and is located in Italy’s Motor Valley alongside luxury sportscar manufacturing giants, including Ferrari, Maserati, Lamborghini, and Ducati.

Between 15 and 20 different designs from several CRP projects will also be on view, including a rocket engine and other designs for NASA, and parts of cars constructed by the Delta Wing team and the NASCAR and ALMS racing teams.

A sparsely attended event, which seemed odd if a very exciting motorbike was going to be on display, perhaps even demonstrated outside the mansion doors on Park Avenue, where guests might be allowed a test drive, or even ridden up the staircase for a triumphant entrance into the speakers hall from the party area landing, ridden by a beautiful Italian model clinging to the back of the driver.

No such luck. The event turned out to be a presentation of how 3D printing has found an important application in building parts for a smart looking new electric motorbike from Italy, the Energica, which was nowhere to be seen. Instead, where panelists usually sit at the front of the hall, a long table displayed the black parts and other constructions (including a prosthetic leg, and a knee support for absorbing impact when paratroopers land) made by 3D printing.

The top piece is a knee brace for paratroopers as they land, the lower is a prosthetic leg, parfts made by the Windform 3d printer (pic)

So what we got was a lesson in how the Windform 3D printing process produced all these hard black parts – packing powder in multiple layers and heat lasers – from computer blueprints so efficiently that the electric Energica motorbike was created in three months from paper to its incarnation as a silent one man rocket, a 220 kilo flying bomb which pedestrians may have a hard time hearing coming, since the only noise it makes is the whining whirr of its gears.

Is the whirr enough warning?

The closest we got to a real Energica, this is the core of the presentation (pic)

Stewart Davis the operations head of CRP USA which has a factory in Mooresville North Carolina – “within 100 miles of every NASCAR team” he said – made the presentation. He confided that the issue of how silent the Energica would be was the first question everybody asked him. Chris Nugent, the head of the US motorcycle division of CRP Group who is setting up the infrastructure here for the introduction of the green machine in 2015, allowed that it may be necessary to install a speaker to generate an exciting noise a) to warn people it was coming and b) bring back the sonic thrill of a roaring gasoline motorbike for the rider.

Included in the slides were two videos, the first describing the details of Windform 3D printing and its “additive laser sintering technology” and the second promoting the Energica bike, “a powerful racing sculpture…flying high with the green power of pure clean energy” as it raced through the streets of Modena, presumably in the very early morning. Providing “the DNA for the next generation of speed bikes” its top speed is 220 kilometers an hour and its range 150 kilometers.

The 3D printer has inspired these not very attractive masks, in the manner of all 3D printers, which currently produce only ragged objects, it seems (pic)

One application of the Windform process is a scanner which can learn the shape of your face and feed it into the printer. Out comes a lump and when the surplus powder is brushed off you have a mask which fits your face perfectly. An artist had designed masks for them which resembled bird’s nests, a striking approach with the slightly macabre overtones of a horror movie in which a the model’s face is being traversed by a giant spider.

Afterwards sandwiches of the Manhattan business meeting kind (huge fat slices of bread with a slim filling of pressed ham and tomato) – were provided with wine. Interesting conversation ensued with Julie, Stewart wife who lives with him in Orange County 40 miles outside Los Angeles, and spends three hours commuting on the expressway every working day (one hour there and two hours back), and with Argentinian born Sandro, a construction engineer, divorced with a 13 year old son, who wished he had married an Italian wife.

Sandro agreed that the beautiful lady keeping a young child amused while apparently waiting for someone to leave the event was indeed typical of Italian society. There were no baby sitters in Italy, he had found in his multiple visits, he said, because there is always a grandfather or grandmother to look after the child. Events were often attended by ladies with their children instead of leaving them home, he reported, even the opera, where they would run around while the performers sang. But they were always well behaved.

Julie said that the couple owned two mastiffs and showed me pictures of their semi human, dark velvet faces on her iPhone, dignified and less wrinkled than expected. She said she had never noticed that they were aware of her or Stewart landing at the airport and about to come home, as James Lovelock had written in his book about research on the edge. She would now look and see if they had that sixth sense.

(ANSA) - Milan, July 10 - It sounds like a daydream - a sleek, powerful, state-of-the-art motorcycle with Formula 1 technology that plugs into the wall. But the battery is not the most surprising aspect of Italy's first electric street motorcycle - the Energica - poised to enter dealerships in 2015. Much of the body of the first working model was sculpted by a 3D-printing machine that sprayed layer upon layer of high-performance Windform material from digital designs. And yes, the superbike drives like a dream, reaching a top speed of 220 km per hour. It has a range of 150 km and lasts 11 hours, though at a more moderate everyday pace of 70 km per hour. The batteries can be recharged within three hours with a normal socket or in less than 30 minutes to 80% capacity with direct current. The Energica will make its New York debut on September 10, as the subject of a seminar on creativity and technology given by its maker, the CRP Group of Modena. CRP Group will reveal the secrets behind the electric superbike's unique design at the Italian Cultural Institute in New York as part of the year-long programme of events called, "Italy in the US: Year of Italian Culture in the United States". The Italian foreign ministry's programme is also sponsored by leading Italian companies like the energy giant ENI, Intesa Sanpaolo bank and the multinational confectioner Ferrero. CRP Group is a decades-old racing mechanics veteran located in the Italian MotorValley of luxury sports cars, also home to Ferrari, Maserati, Lamberghini and Ducati. CRP Group's racing electric motorcycles TTXGP and FIM e-Power won second place in the world championship races of 2010 and 2011. "Our company is particularly devoted to innovation, and Energica represents an example of that attitude," said Franco Cevolini, CEO and technical director of CRP Group. "Together with our American company CRP USA we are directly involved in state-of-the-art projects, and the workshop in New York is a great chance for us to be part of a great venue dedicated to the promotion of Italian excellence," Cevolini added. Stewart Davis, director of operations for CRP USA, will give the workshop, which is called "Energica, the First Made-in-Italy Electric Motorcycle, and High-Performance 3D Printing Materials. The Italian Experience Outrunning Imagination". "We are involved in many different projects (using) 3D printing, from motorsports to aerospace, and we are glad to be in New York to represent the workmanship of the company," said Davis. "It's a great occasion to illustrate how the creativity and the technology associated with Windform high-performing materials can lead to incredible artwork like the construction of a vehicle". Energica was officially unveiled at the 2012 Motorcycle Show (EIMCA) as a running prototype. The electric superbike will be featured this year in the 1.618 Sustainable Luxury Guide, the world's first sustainable luxury online guide. Reservations are open on the website, http://www.ecrp.eu/en/order-energica.html.
Read More 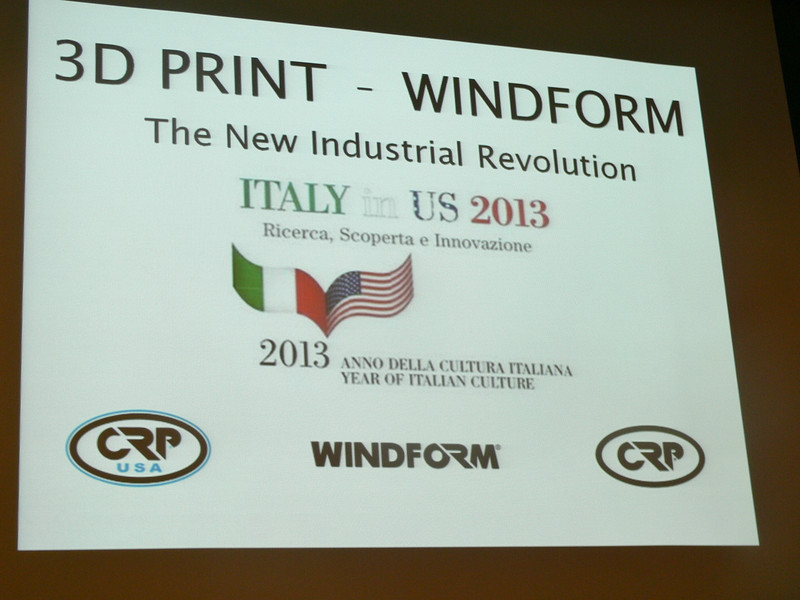