How to buy the good stuff straight from the soil (from recommendnyc.com etc.):

If you hope to find vegetables that look as colorful and taste as real as Mother Nature intended there are two spots where you can count on finding them on the Upper East Side, two fine stalls we recommend among the scores active in the 52 farmers markets dotting the five boroughs, with 24 listed active in Manhattan (see www.grownyc.org (212 788-7900)).

While it may be disappointing to find that most produce at farmers markets in New York City has a coating of pesticides to wash off, you can find organic and chemical free veggies and fruits on the Upper East Side either mid week at Mt Sinai Farmers Market, among its stalls laying out produce and pies and apple cider all Wednesday till 5pm, or on Saturdays at at 82nd Street and York/1st, in the yard inside the South side railing.

The problem is that just like other Farmers Markets the Mt Sinai attraction has many fruits and vegetables straight from the farms upstate or in New Jersey, but most of them are not organic ie the small farmers use pesticide and chemical fertilizer to grow and protect their apples and lettuces just like the big boys who supply supermarkets.

One farmer who takes the opposite path is Ernesto of Acevedos Farm in Orange County which is a two hours trip up the Hudson in a little town called Goshen (845 741 8237. His 20 acres yields a stall which is an artists palette devoted to growing the real thing in all its colors and flavors courtesy of Mother Nature alone without the help of pesticide or fertilizer, and his purism oays off.

In every case his array of produce has deeper color, and the richer flavor, of plants which are allowed to respond to sun, rain and rich and moist black soil without the artificial stimulus of chemical boosts which have their origin in the second World War explosives that had to find a new home after the defeat of Hitler and the Emperor of Japan.

Earthy, knobbly, real – the source of phytochemicals which will do you good faster than pills, and more effectively, according to science, and prepared by an enthusiast.

As a result his potatoes are small in size instead of being big fat and somewhat short of real taste like their supermarket cousins, his carrots are naturally unpredictable in shape but reassuringly sturdy and ineffably carroty tasting instead the uniformly long lathed shape of the simply sweet ones you might buy in Whole Foods.

His beets are a deep scarlet with luxuriously long and healthy leaves, his zucchini seem brighter yellow than the sun and his garlic has huge knobbly sections with glowing white interiors inside funky rough hairy wrapping which by its very crispness you know betokens a powerful pungency to hearten any dish, not to mention cure you of all your trivial ailments overnight.

See those tomatoes, half green half rosy – they’re riper and much more tomato-ey than gas reddened green tomatoes at your local junk veggie market

In fact Ernesto’s achievement is on display as soon as you walk up to his stand, for every single vegetable in every tray or openly arrayed along his tables announces its nutritious power and strong flavor to those with eyes to see simply by its naturally colorful appearance.

Too bright for the small camera, zucchini of a nourishing nature beyond the Manhattan supermarket, even Whole Foods

The whole tent array is a palette of colors which not only announce Ernesto to be as much artist as farmer but also betokens the nutritional value of every item, for in those colors are what science has in the last twenty years proved to be the phytochemicals attached to color, the flavonoids whose deep reds and scarlets and vibrant greens signal, as now proven in lab and epidemiological studies over twenty years in peer reviewed journals, to counter human ills up to and including cancer, which in the lab scientists can demonstrate by placing them next to cancer cells which they then induce to commit suicide (apoptosis, as it is called) faster than chemotherapy.

So while the proof will be in the eating if you pause at his stall long enough you will see with your eyes just how beautiful and imbued with life are his shining green peppers, his classically striped and seeded melons, and his small yellow potatoes with good black soil still clinging to them, alongside his small cabbages as heavy as cannonballs, which are particularly flavorful.

A similar palette of natural shape and coloring stands out at a stall deep in the inner yard of the weekly market on East 82nd street between First and Second Avenue, south side.

This is Alewife Farm (https://www.instagram.com/p/BFEWHeAgNeX/?taken-by=alewifefarm&hl=en), where on a recent Saturday Sarah Groat, one of the three staff of the 20 acre farm two hours North of Manhattan at Clinton Corners, displays $5 cannonballs of squash in a deep orange which bespeaks their flavorful interiors, compact fresh tasting cabbages for $3, butter lettuce of a fine sturdy delicacy for $4, Italian tropea or long red onions with their unaggressively sweet taste for $1, as well as bright red and yellow cherry tomatoes and other produce free of pesticides, herbicides or chemical fertilizer.

Sarah Groat of Alewife Farm holds a squash of vibrant deep color reflecting its nourishing interior and pleasing flavor, straight from a farm which relies on Mother Nature without explosives from World War II or other chemicals which Monsanto and others are anxious for her to use

Alewife’s items like Acevedo’s are a blessing for sore eyes as well as the stomach, and one might say that Sarah’s appearance of ruddy glowing health is an advertisement in itself for the life enhancing advantages of the output of farms which allow Mother Nature to create her magic without the very doubtful assistance of explosives and other chemicals with their origin in World War II post war surplus, which is how the mania for artificial enhancement of soil and insect killing first was started seventy years ago.

For a variation of your salads why not add in some tropea, the unusually mild and sweet onion the Italians like.

We asked Sarah how the farm was able to get along without such expensive aids and she told us “It’s easy to do if you are willing to lose some crop or wait till the beneficial insects come in. Our fava beans were really hit hard this year by aphids, but we waited and the ladybugs came in and destroyed them all.”

Even some farmers are surprised that parslane, which they may consider a weed more than a vegetable, sells for high prices on the East because people have read up on its abundance of strong health effects

Both farm stalls offer the opportunity for Upper East Side residents to gather Mother Nature’s bounty from outside their doors without visiting Whole Foods, and to enjoy vegetables which look and taste as if they enjoyed life as well.

Special Note: Apples at Migliorelli farm of Tivoli (845-757-3276) at Mt Sinai and at Samascott Orchards of KInderhook ( (518) 758-7224) the big sidewalk stall at 82nd Street are both good, pesticide or not, with Migliorelli farm apple cider at $4 for a half gallon richer, sweeter and more satisfying than a gallon of supermarket cider. At press time the new crop of Ginger Gold have arrived at Mt Sinai at last and they are indeed outstanding.

Mutsu apples are the choice of some demanding apple lovers

Update: Sarah Groat, pictured here with her assisting friend Chelsie a week later than this item, has informed us that in their continuing search for the ultimate in veggie goodness the entire twenty acre Alewife Farm is going to move to new ground soon to escape the rocky soil on which it is currently based which, although giving rise to abundant leafy crops in short order as recorded in the Instagram postings linked above, has broken too many plough blades to endure. 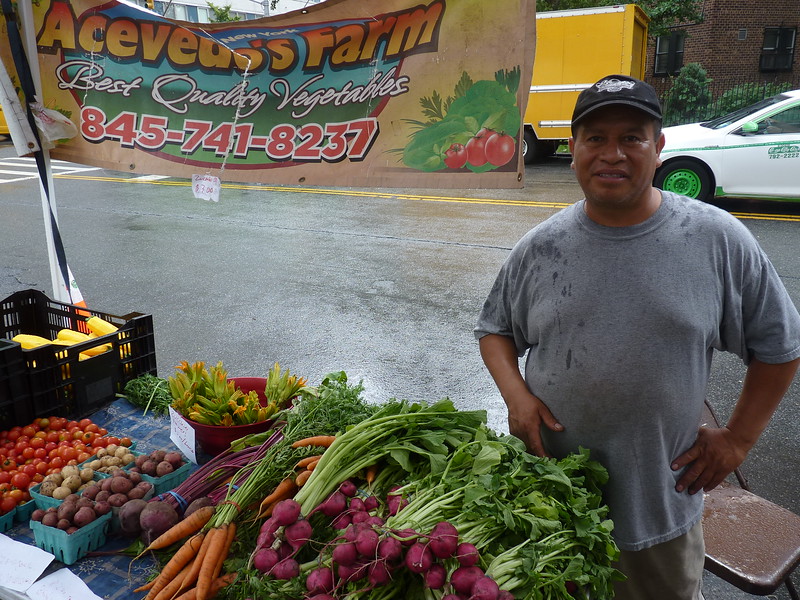